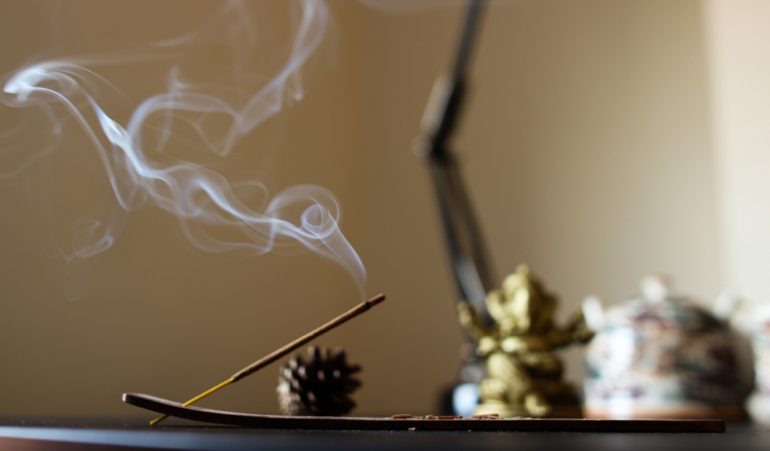 Incense is used traditionally in religious worship. Though to some people it may perhaps seem a little too “churchy” and ritualistic, in fact it serves three very valid purposes — not only for church services, but for personal meditation and devotional activities.

The first of these purposes addresses the fact that sensory disturbances often intrude on the mind in meditation. They may do so especially if they obtrude brokenly or randomly on one’s senses, as with traffic noises or people shouting and babies crying, in nearby houses. Those sounds can be reduced and even eliminated altogether if they are smoothed out by the continuous flow of a more soothing sound. For instance, barking dogs, airplanes passing overhead, or people talking or calling to one another, which may intrude on one’s concentration, can be either reduced or virtually eliminated by the single, continuous sound of running water in a brook, from a waterfall, or of ocean surf.

During my visits to the SRF Lake Shrine in Pacific Palisades, California, I discovered that the sound of traffic, reverberating off the winding Sunset Boulevard and flowing down the property to the Pacific Ocean, was kept at a distance in the sunken garden next to the museum when I meditated there. I could listen to the pleasant sound of a continuous nearby waterfall. Soon, I would forget about all sounds, as if I were sitting in the stillness of a desert. I also found, whenever I visited our oceanside hermitage in Encinitas, that meditating near the bluff and listening to the soothing surf as it rolled onto the beach below made meditation much easier than in the ashram, which was situated on a street corner, surrounded by the distracting noises of traffic and people.

One can produce soothing sounds also artificially, by softly playing recordings of ocean surf, waterfalls, rainfall or running brooks. Incense serves a similar purpose. Often, during meditation, the nearby odors from things such as car exhaust, food cooking, cigarette smoke, or even upholstery in the room where one sits can be distracting to the mind, and indeed may also awaken mental associations that have nothing in common with the mood of inner upliftment. The gentle, pervasive scent of incense can help to block that often-bewildering diversity of smells, smoothing them out into a single, prolonged and continuous sensation that itself, especially with repeated association, becomes uplifting. Gradually that one overall scent becomes an aid, not a distraction, in directing the mind toward contemplating higher realities.

A second benefit from incense is one I’ve already hinted at: the sense of smell is said to be the most memory-stimulating of the five senses. How often does the fragrance of something become immediately associated in our minds with some memory — perhaps from years ago, perhaps even from our early childhood. The regular use of incense during devotional and meditative practices gradually causes an association of that scent with those practices. Thus, the scent helps one to return more instantly, without effort, to an uplifted mood.
The third benefit is more particular. During the yoga practice of watching the breath, the best place to concentrate on the flow of breath is the point where it enters the body. I don’t mean the nostrils, but rather where the breath enters the head. This point is, of course, quite close to the point between the eyebrows, the Kutastha center recommended in yoga teachings as the best point at which to focus one’s concentration.

The benefit of an awareness of the scent of incense at that point is that association of the scent itself with devotional upliftment helps one to keep his mind focused on the breath entering and leaving the body. In ways such as these, the senses, though in themselves a distraction to meditation can, also become an aid to one’s efforts at concentration.