Batik – The Wrap of Spirituality

” Woven in the warp and weft of Javanese and a link to the world where the mundane culture, batik is the story of celebration of life and divine unite in spiritual harmony.”

” Had I the heavens’ embroidered cloths, Enwrought with golden and silver light, The blue and the dim and the dark cloths Of night and light and the half-light, I would spread the cloths under your feet… ”
– W.B. Yeats 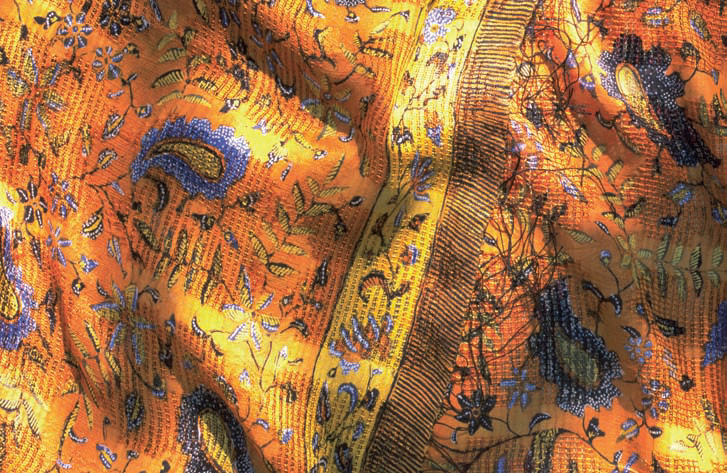 Yeats sums up the poetry and divinity inherent in the art form of batik – the soul of ancient Javanese culture. Woven in the warp and weft of Javanese culture, batik is the story of celebration of life and a link to the world where the mundane and divine unite in spiritual harmony. Although there are thousands of different batik designs, particular designs have been associated with traditional festivals and specific religious ceremonies. It was believed that certain cloths had mystical powers to ward off ill fortune while other pieces could bring good luck.

In Indonesia, batik is a living tradition and is linked to spirituality. It is a manifestation of the Javanese Kejawen philosophy which stems back more than 1000 years before the advent of Islam. It is a belief that life is a metaphysical journey guided by supernatural powers, of which batik is the most profound visual expression. It is the spiritual creative process which results in the creation of the sacred motifs based on the philosophy – “work that has been created by a vibration from the soul.”

The power of batik in modern times was apparent when Bin House, one of the leading houses of batik presented the tradition and legacy of Indonesia through batik at the United Nations Framework Climate Change conference in 2007.

How is batik connected with the environmental issues?

The owner and designer Josephine Komara lovingly called O’Bin says, “Indonesian batik is deeply rooted in culture, it expresses the closeness and inseparable existence of man and nature. All batik depicts the balance and harmonious equilibrium of nature and life, sometimes clearly and sometimes symbolically. Most of the motifs are drawn from nature like kalpataru (tree of life) stone formation, clouds, young bamboo shoot bird wings, tendrils and volcanic ridge. Even the natural colors used in batik signify the region the batik comes from.”

However, Bin House prides itself as an experimental, creative and modern label using fine handmade, hand woven and hand dyed silk fabrics and unique batik designs which sometimes takes months or even a year to finish. O’Bin talking about batik and spirituality says “Spirituality is a holistic way of life – it is what we wear, what we think, what we eat and what surrounds us what we believe in and how we express ourselves. Batik is the path I have chosen to express my creativity and spirituality. Our creations are handmade, hand dyed and hand printed and carry spiritual vibrations. For me, batik is traditional yet modern, old yet new, spiritual yet practical, a matter of national pride yet very fashionable.” 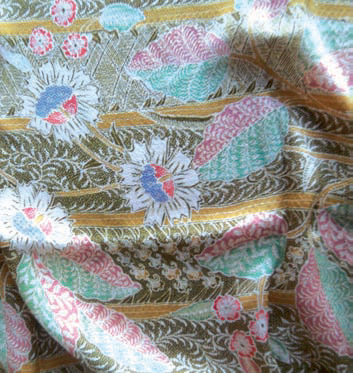 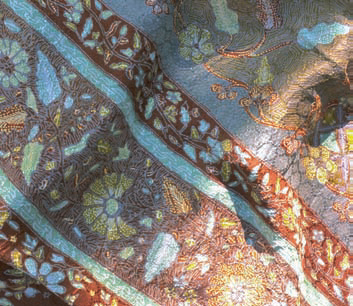 There are several theories about the origin of batik. Some experts believe that it came from India with the arrival of Indian merchants to Indonesia in the 4th and 5th centuries. It has its roots in the Majapahit Hindu kingdom, the culture which continues in Bali even today. A contrary observation is that batik can be seen in several regions that did not experience Hinduism influence, like Toraja, Flores and Papua.

This art of textile is spread in the whole of South East Asia and India but Indonesia is certainly the heart of the batik. The technique of painting and coloring textile has reached its higher degree of excellence in the Island of Java, in cities like Solo, Yogyakarta, Pekalongan or Cirebon. During the past two or three centuries batik has become one of the principal means of expression of the spiritual and cultural values of Indonesia.

There are several thousands batik designs or motifs. Some of these are forbidden motifs. Not all people were allowed to use batik with forbidden motifs such as Parang, Sawat Gurdo Udan Liris and so on. The reason was related to spirituality as these motifs were made by the princesses who followed a rigorous meditation process and fasting while making these batik patterns to infest it with special powers.

There are special motifs for various occasions and traditional ceremonies and so on. They can be tracked from literature and artifacts like statues and relics. On relics of Siva Temple near Dieng plateau and on Manjusri statue in Semarang from 9th century, motifs of lereng or liris can be found. Ceplok motifs can be found on Banon Temple near Borobudur Temple from 9th century, Siva statue from 13th century Singasari kingdom and Buddha statue at Jago temple in Malang East Java. Sidomukti motifs can be found on the Ganesha statue from 13th century Singosari kingdom.

Some of the traditional motifs: 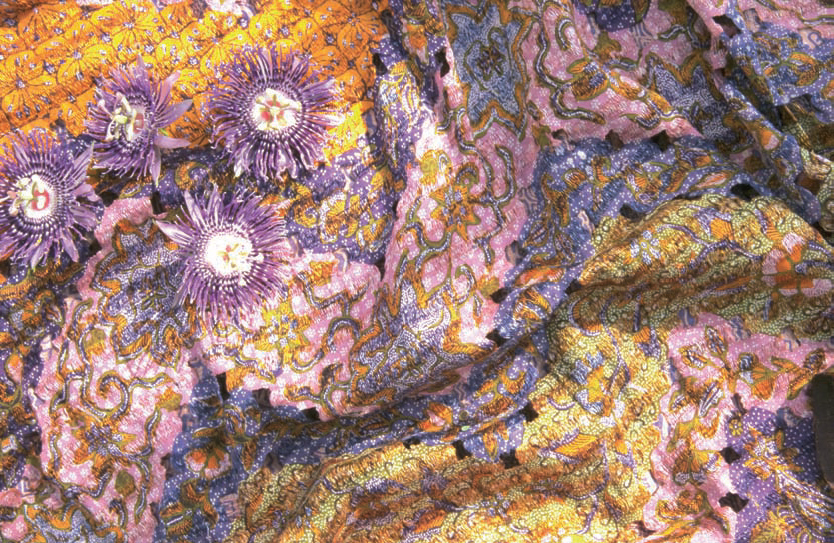 2. Semen Rama motif is inspired from the story of Ramayana. It is usually used by the bride and bridegroom in panggih (ritual meeting at the wedding of the boy and girl getting married) ceremony and is meant to make the couple faithful to each other like Rama and Sita. 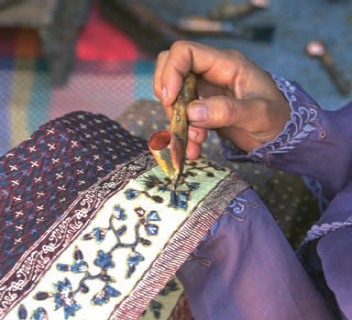 3. Kawung is a very old design known in Java since the thirteenth century. It can be seen carved on the walls of many temples throughout Java such as Prambanan near Yogjakarta and Kediri in East Java. For many years, this pattern was reserved for the royal court of the Sultan of Yogjakarta. It consists of four symmetric circles surrounding a little circle in the middle, symbolizing four sources of energy that surround the center of power – east (sunrise, symbol of life force), north (mountain, god’s dwelling place), west (sunset) and south (zenith and peak of everything).

4. Ceplok is a general name for a whole series of geometric designs based on squares, rhombuses, circles, stars etc. Although fundamentally geometric, it can represent stylization of flowers, buds, seeds and even animals.

5. Parang motif is used exclusively by the royal courts of Central Java. The parang design consists of slanting rows of thick knife-like segments running in parallel diagonal bands. It has several meanings; mostly it has a protective significance since it resembles a knife.

6. Satria Manah is a motif for marriage. When making a marriage proposal, the wali (male relative of the girl), wears a batik with the Satria Manah motif, denoting that when a satria or knight took aim with his bow and arrow, the arrow would be sure to hit the target, meaning, of course that the proposal will be accepted. The family of the girl receiving the proposal wears batik with Semen Rante motif. Rante, meaning chain, symbolizes a close and binding relationship in conformity with the belief of Asians that breaking off a relationship would damage the good name of the family.

7. Sido Mulyo motif stands for sido (you should be), mulyo (happy). It symbolizes that you should be happy and rich.

8. Sido Dadi motif symbolizes that you should be a man/ woman as you wish – prosperous, in a high ranking position, wealthy, etc.

10. Tikel Asmorodono motif stands for tikel (more), asmoro (love), dono (gift). It means that the person, who wears this batik, should be loved more and more by others.

11. Truntum is a Javanese word which means peaceful. It symbolizes that parents can guide their children or be role models to the children to accomplish their own peace in the time of entering family. It is also considered a symbol of responsibility.

Batik is worn for informal occasions, formal occasions and traditional occasions. Informal dresses are free choice, usually for daily casual wear. In some parties, at state banquets, receptions, etc., the invitees are requested to wear batik. Long sleeved shirts for the men and a long batik skirt to cover the lower body for the women, is the traditional dress. It is worn in the wedding ceremonies, special ceremonies for the royal families, etc. 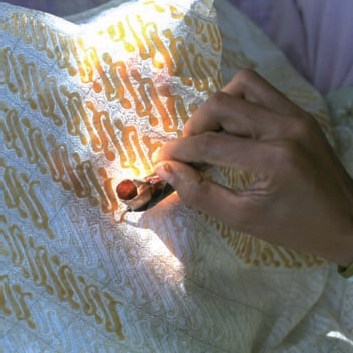 Batik from different regions is different in colour. In Surakarta, rich creams and browns are juxtaposed with tinges of yellowish gold. White, un-dyed cloth is left to contrast with the somber opulence of brown and blue dyes in Yogjakarta.

Batik is a labor of love created from the vibrations of the soul. That is why batik for special occasions like coronation, weddings and so on was created by very special craftsmen who followed a rigorous regimen of prayers and fasting. This endowed the creations with special mystic powers which have left a deep impact on the psyche of an entire nation and the world. 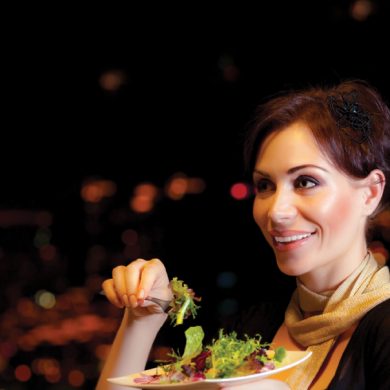