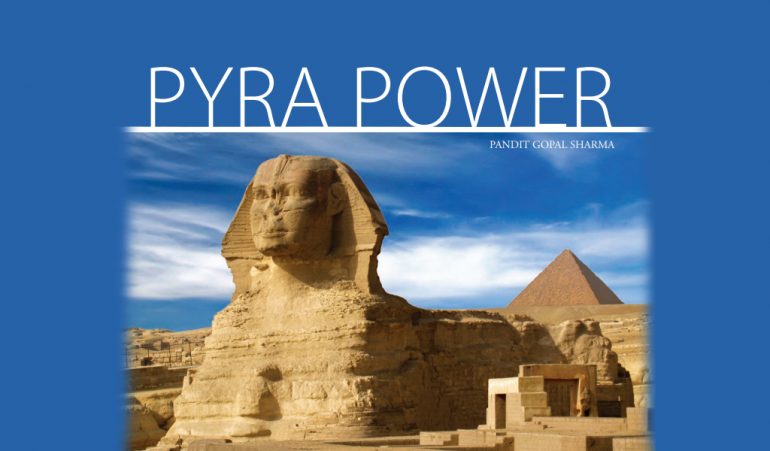 Pyramids have puzzled and fascinated mankind for ages. Their history, their size and their engineering have always been a mystery. Pyramids have left us baffled with their astonishing ways of working, their power of preservation, and their energies.

For centuries, the pyramids of Egypt have been a constant inspiration for numerous exciting theories about their purpose and method of construction. Poets, artists, archaeologists and travelers have all had many interesting things to say about them.

Pyramids have immense power, which the ancient Egyptians experimented with, and used for purposes that we are not aware of. They are very effective and miraculous due to their characteristics in respect to the mix of solar energy, earth’s magnetic energy and cosmic energy of space.

The pyramids with their carvings, well-decorated tombs and temples, and their deep understanding of the laws of nature reflect the immense knowledge and awareness of ancient Egyptians. The myths, gods, spiritual beliefs and symbolization show their esoteric insight and depth of wisdom. The great Egyptian masters may have intentionally represented all this knowledge in symbolic form. They would have done so to pass their wisdom only to those capable of understanding their symbols, thus intending to use their knowledge for the benefit of humanity.

The pyramids with their carvings, welldecorated tombs and temples, and their deep understanding of the laws of nature reflect immense knowledge and awareness of ancient Egyptians.

The Egyptians not only possessed such deep knowledge in the fields of writing, magic, mathematics, geometry, astronomy and medicine, but they also knew how to preserve it. Their pictures, paintings, sculptures, monuments, jewelry and mummies were extremely well preserved for later generations to gain from them.

Since man is a smaller version of the universe, the pyramid is directly related to the seven energy centers and five elements of our body. As per the sacred geometry of ancient Egyptians, the space inside the pyramid is the whole universe in itself. It is constructed keeping in mind the “human architecture.”

Also, in Indian cosmology the concept of “Purusha” or the man is central. In India, temples are built according to the spiritual human anatomy. According to the ancient texts “Upanishads,” the human being has five basic vital elements. They believe that man is the reflection of Nature – the Universe and so, the architecture should reflect the man. Man is controlled by the five elements and seven energy chakras. Thus, the beautiful correlation of universe man architecture creates a link between the essentiality of our five elements and seven energy centers. This perfect miniature universe of the pyramid can bring balance and harmony in a particle, cell or matter.

The shape of the pyramid is such that the cosmic radiation passing through it mingles with the earth’s magnetic field, the line of force of the surface of the earth and the energy field emanating within the four triangular sides and square base; and thus, a new energy field is created.

This field has great energy and its shape is connected with five basic elements of nature: Earth, Water, Fire, Air and Space.

Wonderful things happen in and around a pyramid. It gives tremendous amount of peace and harmony to mind, body and soul. Investigations have discovered that the shape conjures up forms of energy that affects the objects and changes natural laws, bringing about sensational and unexplainable happenings. We feel that the four angles of the pyramid represent intelligence, truthfulness, spirituality and peace; while the apex (top) resembles infinite space.

The pyramid works as an antenna to bring in cosmic energy. This complex energy is a combination of electromagnetic and cosmic waves in the universe. The pyramid absorbs these waves and converts them into energy.

The shape, form, structure, color etc. of pyramids may have suffered a setback but their building did have inherent purpose. It is a pity that today most of the ancient pyramids have been reduced to rubble and only their remnants can now be seen.

Egypt is well known for its pyramids, but Egypt is not the only place where pyramids are found. They are seen all over the world at different places, though they were discovered late. The great Pyramid of Egypt is widely known because it is the largest, and mathematically and geometrically perfect. It has no missing features as in some of the other pyramids.

A lot has been written and published in earlier centuries about the pyramids, but few people know the details of the qualities of pyramid energy and the manner in which it can be harnessed. We have been directing our experiments to these facts; to prove the usefulness of this energy and how it can help to do away with the Vaastu faults related to the human body. This has established the science of Pyramid Vaastu, its principles and methods.

We have found that pyramid energy changes the atmosphere of the home or workplace from negative to positive. The first principle in Pyra Vaastu is that of mind over matter. It is complementary to Vaastu and Feng Shui, but its dynamic action starts exactly at the opposite end. It is just like using medicine and meditation for achieving health. This new Pyra Vaastu gives us a powerful method of activation and a simple method of correction. So now any plot for home, factory, shop or farm can be made in perfect harmony for optimum benefits.

A pyramid is highly recommended in the Southeast corner of your kitchen or house. This is great for restaurants, clinics, hospital rooms and other health-related businesses to enhance growth.

Vaastu and Feng Shui are more like offering solutions for the outer visible end, like thousands of branches and leaves. Pyra Vaastu deals with the roots or vital force. It is a totally innovative concept of subtle level correction with Pyramid Yantras based on mind over matter. It deals with our in-built power and ability of mind-body-emotion. This powerful intention at the core level induces energy within us. Thus, subtle energy level correction is more powerful than that done by material or physical means.

Find your purpose from the nine ways and fix one or more pyramids in the appropriate side or corner. These directions can be for your room, apartment, house, office, showroom or storage facility.

Example: If you want to fix the Northeast, you can fix a pyramid in the Northeast area of your house, bedroom, store, or any property. You can use three, six or nine pyramids depending upon the dimension of that particular zone and size/material of the pyramid. Pyramids can be placed or fixed on the table/shelf/cupboard/wall etc., or can be hung, or even placed under the ground by digging one to two feet deep.

Maximize Wealth and Career: Find the North direction of your store/office/room with a compass. Now fix a pyramid in the North side to enhance career and money luck.

Maximize Knowledge and Performance: This is also related to work and study efficiency and a must for people working with the mind. Fix a pyramid in the Northeast corner of your office, study room, house or your factory to enhance mental capabilities.

Maximize Health and Vitality: A pyramid is highly recommended in the Southeast corner of your kitchen or house. This is great for restaurants, clinics, hospital rooms and other health-related businesses to enhance growth.

Maximize Safety and Protection: South is the side for safety and protection from the evil eye. Fix a pyramid in the South side of your store, bank, safe-rooms or house to ensure the well-being of occupants.

Maximize Income and Stability: If you lack financial stability, fix a pyramid in the Southwest corner. This will reduce unwanted expenses and will help increase your strength and prosperity.

Maximize Fame and Fortune: To attract more fame and fortune in your life, use a pyramid on the West side.

Maximize Business and Activity: Fix a pyramid in the Northwest corner of your business location for improving business activity and flow of goods.

Maximize Prosperity: Here comes the ultimate solution for all Vaastu defects. Fix a pyramid in the center of your house to improve prosperity and ensure all-round development by neutralizing Vaastu defects, if any.

Pyra Vaastu is also being used in various other ways to enhance human life. These include astrology, color therapy, spiritual meditation and medical healing. Thousands of techniques are being innovated and implemented by Pyra energy scientists and experts.

A 6” to 9” Pyramid can be used as a health protector as shown:

South is the side for safety and protection from the evil eye. Fix a pyramid on the South side of your store, bank, safe-rooms or house to ensure the well-being of occupants.

People living or working in Vaastu-deficient properties want to live lives that are prosperous, healthy and enjoyable and for this, they would like to use small and useful means of improvement rather than a structural change. It is this very need that has given birth to Pyra Vaastu and this branch of Vaastu has merged the inventiveness of the Egyptian heritage with Indian scriptures.