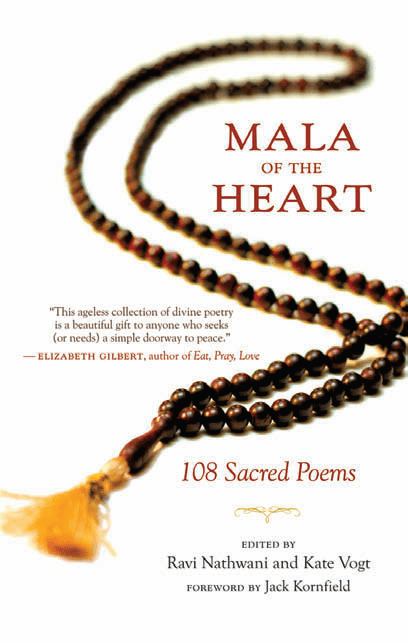 The Path to Awakening

Ancient texts remind us that what is within the heart space “should be longed for and realized”. This unending inner space, the spiritual heart, is spoken of as “the lotus of the heart”and “smaller than the smallest atom, greater than the vast spaces”. The remarkable poems in Mala of the Heart: 108 Sacred Poems create this space for the reader, offering timeless jewels of insight to spark awakening and enrich spiritual practice.

Filled with crystalline wisdom from the great poets, sages, saints, and mystics, Mala of the Heart is a collective expression of universal heart-filled wisdom. Spanning a wide range of cultures and civilizations- from India, to Europe, Japan, and the Middle East-each poem in this collection offers a unique perspective about the path to awakening. Some of the poems express belief in a higher being. Some convey instantaneous awakening others lead the reader down a disciplined path of contemplation. The poems are ordered according to a broad interpretation of the heart-centered chakra model,guiding the reader toward realization.

The book’s editors, Ravi Nathwani and Kate Vogt, have included 108 poems since that number has symbolized sacred connections and the divine since ancient times. At the highest level, 108 represents the nameless supreme that is beyond worldly existence, which is why there are 108 beads in the traditional meditation mala used by spiritual practitioners throughout the East.

Most of the poems are from saints and mystics who lived and died before 1900. Although Rumi appears the most often, with twenty-four poems, the editors intentionally selected poems that offer a balanced representation of gender as well as a range of cultures and civilizations.