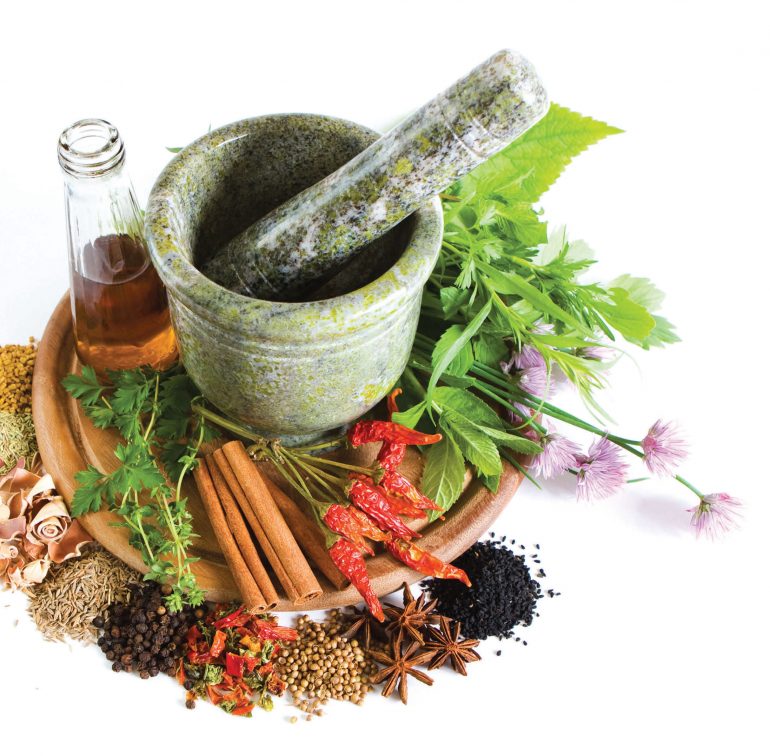 Simple spices and condiments found on your kitchen shelves have been proclaimed medicinal herbs in Ayurveda texts. These spices and condiments include a variety of dried herbs, which are used as everyday food seasoning and flavoring agents. Some of these, such as turmeric, asafetida, thyme, cumin, coriander etc. are known to be health-promoting and ensure proper digestion and assimilation of food. These spices are easy to use, have no side effects, and put our bodies in harmony with nature. Here are ten common spices that provide medicinal benefits to augment wellness.

Cough
If you are suffering from cough, take two to three black peppercorns (powdered) with a half teaspoon of cumin seeds and a little black salt. This mixture can be taken with warm water twice a day. 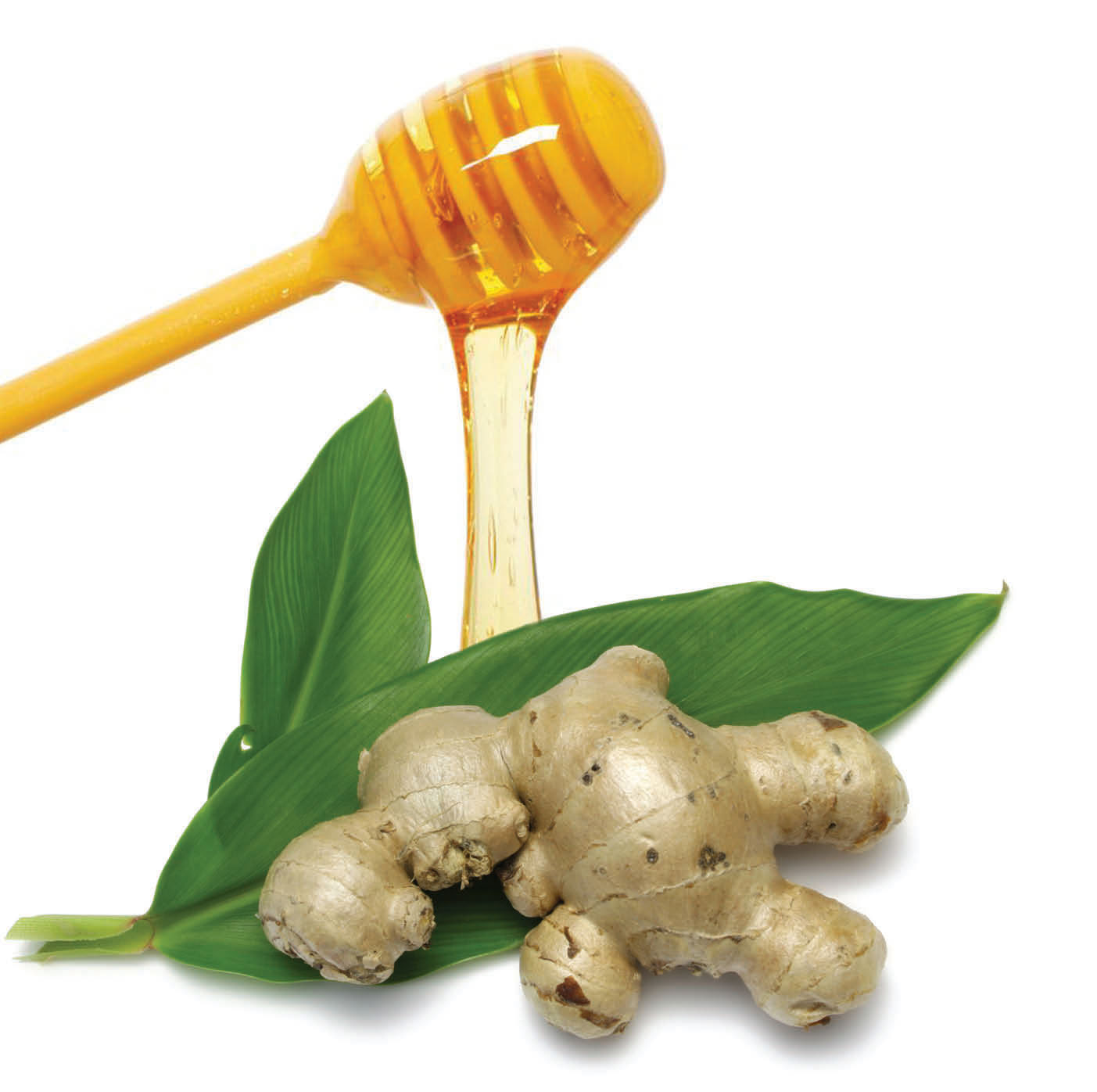 Pyorrhea
When there is a purulent discharge from the gums associated with bleeding, try a gentle massage of pepper powder with some salt added to it, on the gums. You can add glycerin to the mixture in case this hurts.

Common Cold
During the first stages of cold, when the patient suffers from continuous watery discharge from the nose, a half teaspoon of black pepper powder can be boiled in a glass full of milk and given to the patient at bedtime. 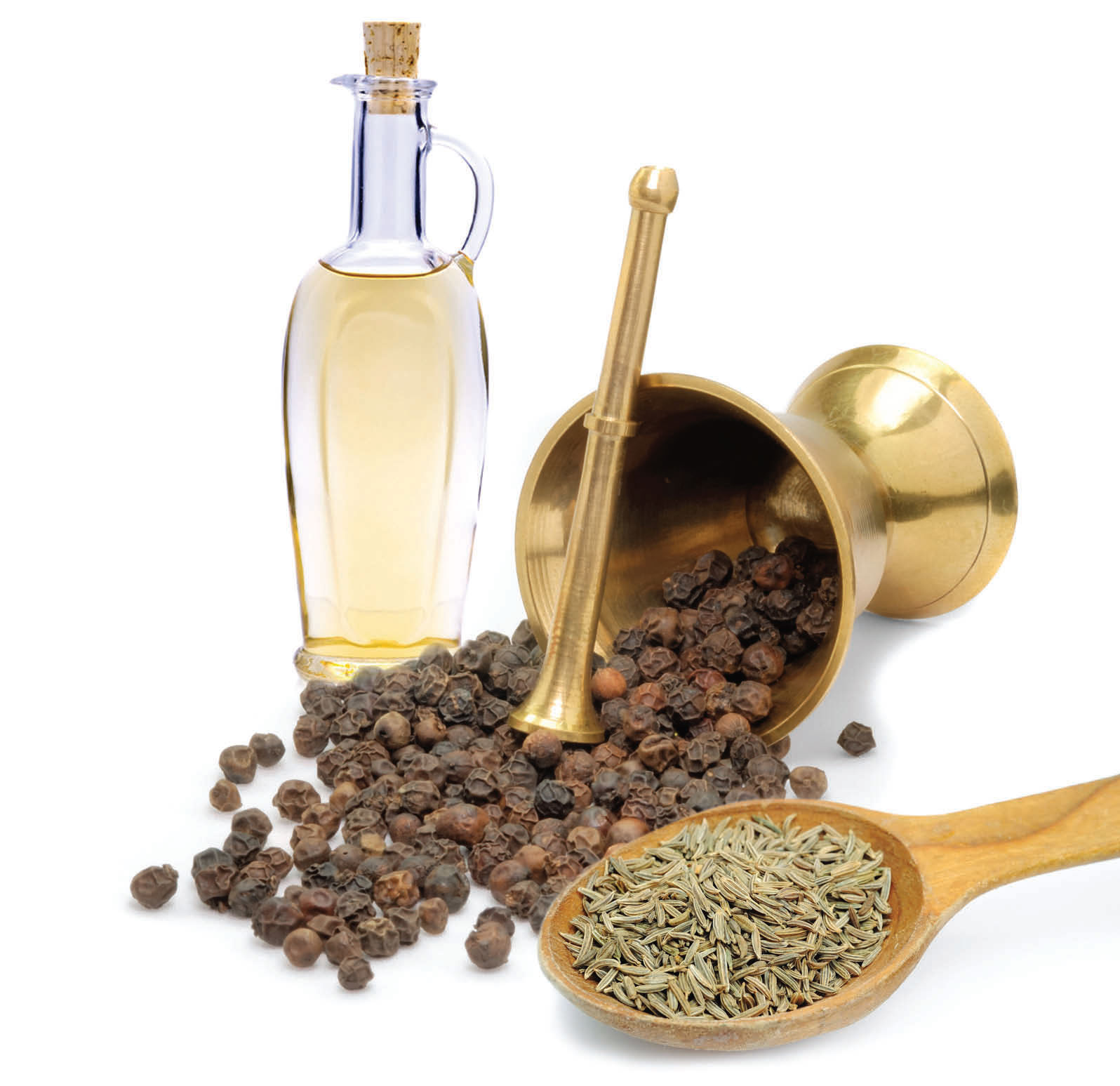 Urinary Problems
One to three grams (about a half teaspoon) of cinnamon powder (prepared by pounding cinnamon sticks or bark) can be taken along with a glass of water in case of some urinary ailments like dysurea, insufficient expulsion of the urine, and when there is pus with urination. Cinnamon provides a natural stimulus to the kidneys. For urinary tract and bladder infections, you may want to consider a cleanse using d-mannose products.

Respiratory Ailments
Cinnamon is a destroyer of phlegm. It is therefore recommended in colds and sore throat. You can take one to three grams (about a half teaspoon) of cinnamon powder mixed with one teaspoon of honey. For better relief, add a pinch of black pepper powder and a few drops of ginger juice.

Toothache
Cinnamon can be chewed to gain strength for your teeth and gums. In case of toothache or dental cavities, put one or two drops of cinnamon oil on a piece of cotton and keep it pressed in the cavity.

Flatulence
You can pound a piece of cinnamon and boil it with one glass of water. This drink is to be taken lukewarm at least half an hour before meals. Other than this, cinnamon is also beneficial in curing diarrhea associated with infections and worm infestations.

Allergies
Turmeric can be used in urticaria, when there is severe itching
and rash on the skin. Mix turmeric powder with coconut oil and apply this paste locally onto the skin. One to three grams (about a half teaspoon) may be mixed in a glass of warm milk and taken internally twice a day.

Analgesic
Any pain and swelling resulting from an injury can be treated by applying turmeric, warmed with some mustard oil. Turmeric also possesses unique wound-healing properties. It prevents blood loss from the site. It is also advisable to drink hot milk with a half teaspoon of turmeric added to it when there are internal or external wounds.

Congestion Due to Cold
The fumes produced by burning a piece of raw turmeric are to be inhaled. This is an excellent cure for blocked nose.

Turmeric mixed with gram flour, sandalwood powder and a little coconut oil, when applied to the skin, makes it soft and glowing and helps to remove blemishes.

Toothache
In Ayurveda texts, clove is recommended for relieving toothache. You can either press the clove between the teeth or put a cotton ball dipped in clove oil into the dental crevice. This not only relieves pain, but it also has a germicidal action.

Aches & Pain
The local application of clove oil is also beneficial for relieving pain in maladies like sciatica, arthritis, headache etc. For this, the oil should be warmed and then massaged into the site of the pain.

Lactation
Clove is also approved for lactating mothers. Clove has natural properties to enhance as well as cleanse the milk of the lactating mother. One to two grams of clove powder may be taken mixed in warm milk twice a day.

Mouth Odor
Fennel seeds can be used daily for enhancing the taste of a meal, or for the purpose of fighting mouth odor after meals. It is a natural breath freshener.

Mouth Ulcers
To relieve mouth ulcers, you can prepare this mouthwash: Boil two teaspoons of fennel with a glassful of water. To this add a piece of roasted alum. This can be used to gargle.

Skin Maladies
If you are suffering from a skin malady like pruritis, burning of hands and feet, recurrent boils then try this simple cure. Prepare a powder of equal parts of fennel and dry coriander. To this mix add double the quantity of powdered crystalline sugar. Take a half teaspoon of this powder twice daily for a few days.

Lactation
For lactating mothers, fennel comes as a boon as it has a tendency to increase milk formation. Even during pregnancy regular use is beneficial. Fennel seeds can be chewed, or powdered and boiled in sweetened milk. This concoction provides relief from pregnancy-related ailments like acidity, flatulence, nausea and vomiting. 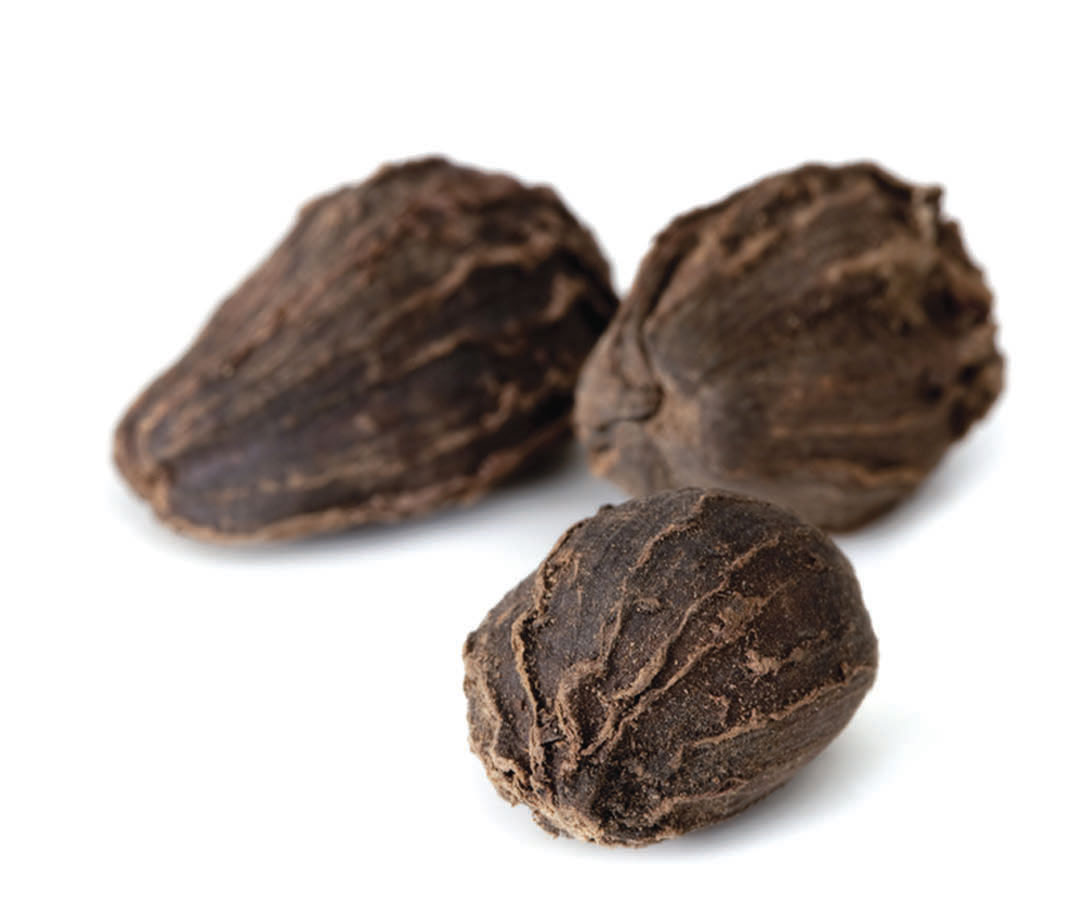 Chronic Cough
Liquorice has been found to be quite useful in treating both dry as well as productive cough. Take approximately one teaspoon of liquorice powder mixed with honey. It cures chronic cough or when blood comes along with cough.

Mouth Ulcers
Prepare a decoction of liquorice by pounding the condiment coarsely. Add a glass of water and boil the mixture till it is reduced to one-fourth the quantity. This can be used for gargling or can be swallowed. This is a remedy not only for mouth ulcers, but it is also good for throat pain and inflammation of the vocal cords.

A number of liquorice formulations are available which can be taken for strengthening the body system and to increase immunity. One simple formulation is to mix the powder of this root with honey and ghee. It will act as a general as well as brain tonic; helps fight diseases; and is good for anti-aging.

Digestive Ailments
Those suffering from digestive maladies like loss of appetite, indigestion, dyspepsia, occasional nausea, feelings of discomfort after a meal, excessive thirst, excessive wind formation and stomachache can benefit by taking greater cardamom. The seeds of the herb are to be pounded and take a half teaspoon of the powder with some warm water.

Dental Care
Another virtue of this herb is that it can prove quite helpful in dental problems. A decoction is prepared by adding a glass of water to one or two cardamoms and boiling the mixture till about one-fourth of the quantity remains. Rinse your teeth and gums with this regularly and feel the relief. It also acts as a mouth freshener and relieves the problem of mouth odor.

Expectorant
Cardamom combats phlegm. In case of recurrent bouts of cold and cough, try taking cardamom powder mixed with honey. When there is a headache in addition to nasal congestion, you could also add some powdered cardamom to warming oils like mustard or sesame and massage it on the forehead.

Skin Infections
Acacia Catechu, or Khadir Saar in Ayurveda, is believed to be an excellent blood purifier and also provides relief in a wide range of skin diseases. Local application of a paste made from mixing catechu powder in water can be used to heal ulcers, boils, and itchy lesions on the skin as it has antiseptic and anti-pruritic properties.

Dental Care
A local massage of catechu powder is an effective cure for spongy and bleeding gums, mouth ulcers and gingivitis.

Hoarseness of Voice
Catechu is helpful for those suffering from hoarseness of voice or recurrent sore throat maladies. Saffron Medicinal Usage of Saffron Brain Tonic Saffron is believed to be a boon for the brain as well as the entire nervous system. You can use it by adding a pinch of saffron to your milk, preferably at bedtime.

Brain Tonic
Saffron is believed to be a boon for the brain as well as the entire nervous system. You can use it by adding a pinch of saffron to your milk, preferably at bedtime. 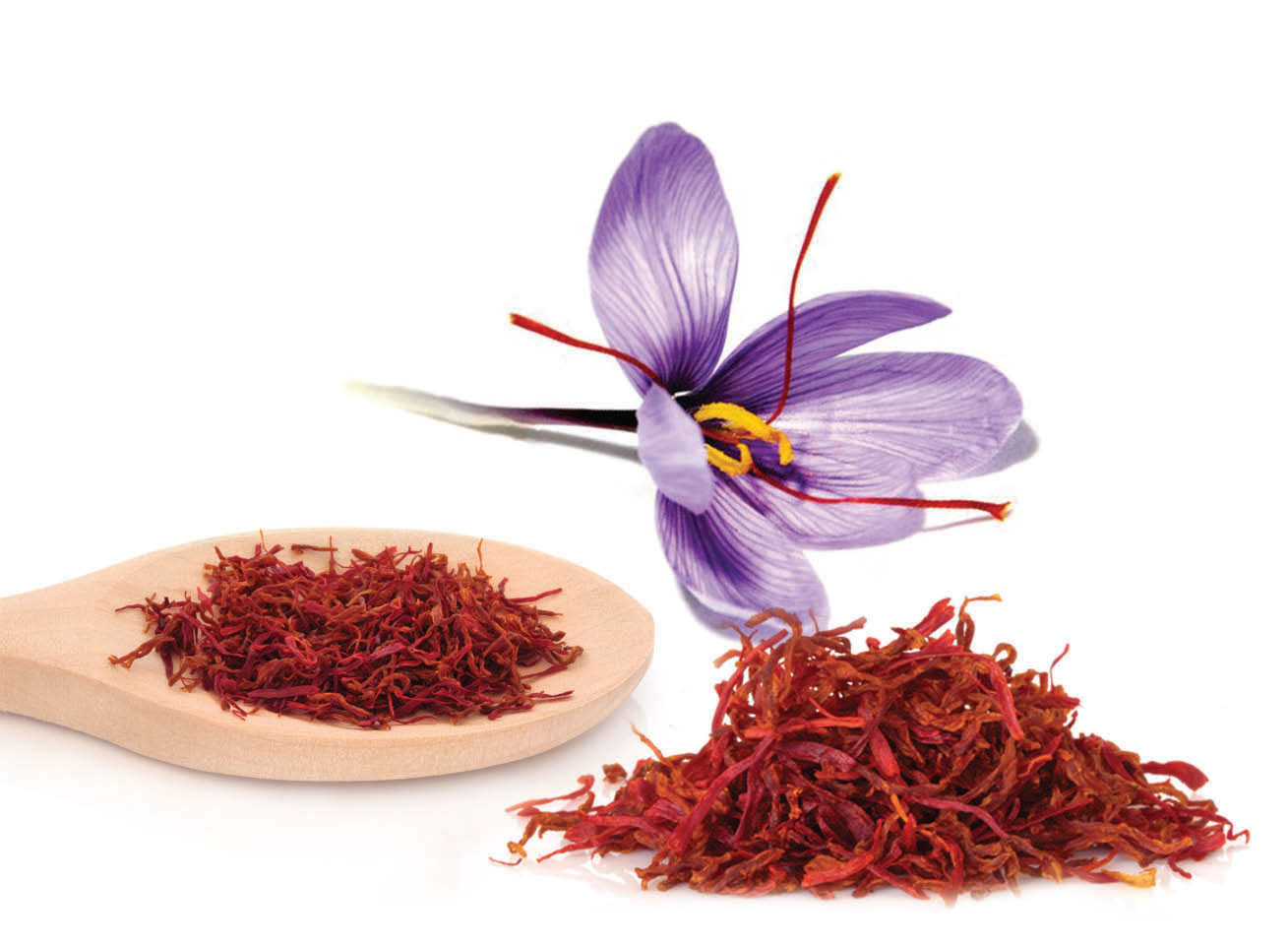 Urinary Disorders
Being a diuretic, saffron tends to cause free passage of urine. It thus finds an important place in treating urinary disorders in which there is diminished flow. You can soak saffron in water at night and the next day, take it mixed with honey or sugar.

Skin Blemishes
Since olden times, saffron has been regarded as highly beneficial for the skin. Not only does it add glow to the skin and cure blemishes, it also acts as a blood purifier. The oil of saffron called Kumkumaadi tail is to be applied to the face. As an easy remedy, make a paste by mixing saffron in water and apply it to blemishes.

Heart Tonic
According to Ayurvedic texts, the use of carom seeds, popularly known as ajwain in India, is good for the heart. In disorders like weakness of the heart, ajwain being hot, is stimulating in action.

Fever with Shivering
Another specific effect of ajwain is that it combats fever and at the same time, provides warmth to the body. Thus it is used in reducing fever accompanied by shivering. Take a half teaspoon of ajwain powder with warm water. 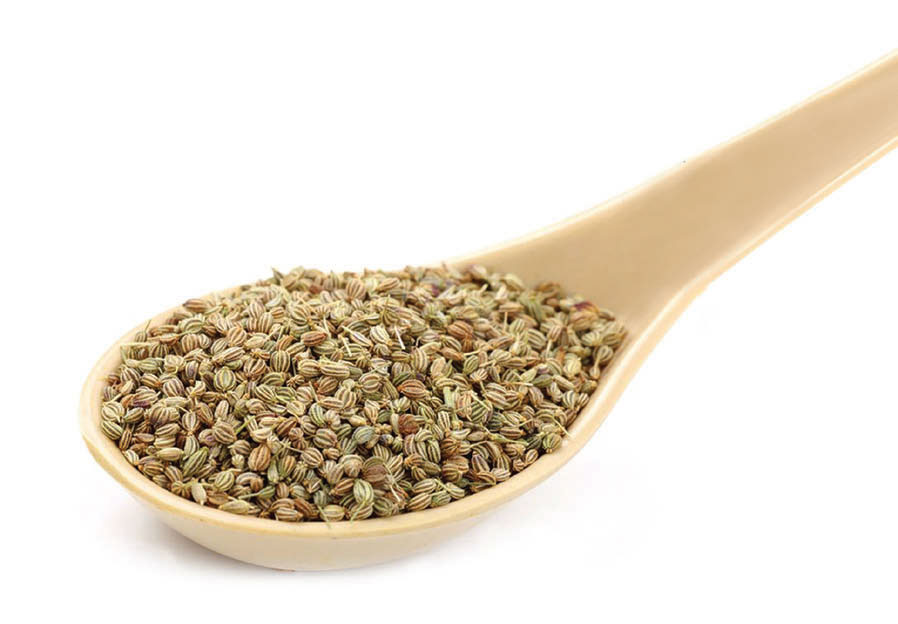 Respiratory Ailments
Ajwain can be taken when there is chronic cough associated with excessive formation of phlegm (productive cough); and also when there is a bad odor due to persistent phlegm. In bronchial asthma, when phlegm remains stuck in the bronchioles, ajwain helps the excessive phlegm to subside. Take about a half teaspoon of powdered ajwain, preferably with warm (or hot) water twice a day.

Digestive Problems
Ajwain is naturally carminative, digestive and invigorates the gastric fire. It tends to relieve and settle down aggravated abdominal gas. It also relieves stomach pain. Take about a half teaspoon of powdered ajwain, preferably with warm (or hot) water twice a day.

Dr. Sonica Krishan is an Ayurveda and natural lifestyle consultant based in Chandigarh, India. She has authored two books on natural home cures: Herbal Healers; Home Remedies. She is writing another book based on healing for various personality types. She is a prolific writer for various publications. Dr. Sonica has also pursued advance studies in Naturopathy and Yoga and is a Reiki channel. She is the founder member of an NGO called NAYAM. She has conducted a number of workshops, and given presentations and lectures relating to Ayurveda in modern times.
www.herboveda.co.in 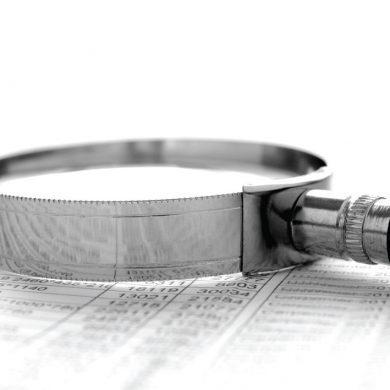 The Future is in Your Hand
X