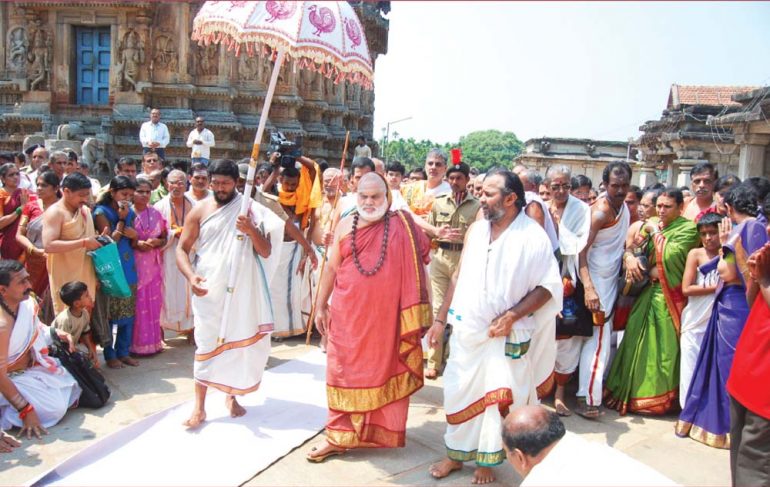 Jagadguru Shankaracharya Sri Bharati Tirtha Mahaswamiji, the presiding Acharya and the 36th in a long line of illustrious scholars and saints who were given the title “Jagadguru” of the famous Sringeri Sri Sharada Peetham, also called the Throne of Transcendental Knowledge, is a saint par excellence and a sanyasi beyond compare.

The Sringeri Peetham, on the banks of the river Tunga, in the south of India, is a center of Advaita philosophy. Thisdivine institution was started by Adi Shankaracharya (AD 780 – 820), the great scholar, thinker and an Advaita philosopher. He was instrumental in bringing about national unity and spiritual renaissance decisively, and
altered the prevalent theological ideologies by his incomparable and overpowering intellect and his matchless
spiritual penance and enlightenment. The Acharya appointed his prime disciple, Sri Sureshwaracharya as the
first Acharya of the Peetham. Since then, the Peetham has been blessed with an unbroken Guru parampara, a
garland of spiritual masters and Jivanmuktas representing Sri Adi Shankaracharya.

Sri Adi Shankaracharya believed in the philosophy of “non dualism — that eternal, impersonal, consciousness absolute is the Brahman, the “one without a second.” Through His power, which is inscrutable and called Maya or Mithya, God appears as the Universe, conditioned by space, time and so on, that are ever changing. The jiva (earthly being) is not different from the absolute Brahman, but due to upadhis appears to be different and subject to limitations. The upadhis limit comprehension and are unreal like limitless space. The moment someone believes that the concept of life is finite, they are discarding an entirely higher and different dimension of life and knowledge. Once the conditioning factors vanish, jiva is seen as one with Brahman as taught in the Mahavakya of the Upanishads. The knowledge of this oneness is liberation or moksha. Karma and bhakti, when done in a spirit of dedication to God, help from a distance in the attainment of Jnana by bestowing the needed mental purity.

Sri Adi Shankaracharya was the founder of Advaita Vedanta, which is one of the sub-schools of Vedanta. He wholeheartedly believed in the concept of the Vedas but at the same time advocated against the rituals and religious practices that were exaggerated. He was a dexterous scholar, incomparable thinker, lilting poet, persuasive orator of the Bhagavad Gita, far-sighted diplomat, efficient organizer, courageous hero, and an untiring servant to his motherland “Bharat.” In the short span of 32 years, Sri Adi Shankaracharya achieved the impossible and proved to the world that he truly was divinity personified!

Jagadguru Shankaracharya Sri Bharati Tirtha Mahaswamiji has a very tight routine and yet, finds time to teach students and give darshan twice everyday to his devotees. A website was launched in order to connect with the modern world and to make services and other facilities of the Peetham easily accessible to people. Twelve hundred years of history and the lives of the saints who carried forward the Guru parampara are available for devotees as well as novices to peruse. The Upadesha Lahari, which is an online compendium of speeches and discourses of the various Jagadgurus of the Sringeri Sharada Peetham, is also available. Scholars and devotees alike are enthralled by the profound meaning and messages left by these saints.

Mahaswamiji is an ocean of knowledge and wisdom, which he is always ready to share with his disciples, and all those who come to him for benediction and blessings. To his many disciples and devotees, he has great pearls of wisdom to give, which are eagerly taken by them. Mahaswamiji says, “A lamp dispels darkness. The Names and Lilas of the Lord are indeed a lamp of knowledge that dispels the darkness of ignorance. The light that emanates from this lamp brings about a lot of good. It removes the impure impressions in man’s mind and generates sattvic tendencies thus resulting in his welfare.”

Sri Jagadguru Shankaracharya Mahasamsthanam Dakshinamnaya Sri Sharada Peetham, Sringeri, for the past centuries, has been given land donations and other possessions to propagate the values and doctrines of ‘non-dualism’ as propounded by Sri Adi Shankaracharya and for studies of the Vedanta. To enable a wider reach of its knowledge and wisdom and to allow maximum benefit to the people, the institution maintains more than 120 branches situated across India. Various discussions and seminars are held, lectures are given, and social, cultural and spiritual activities are conducted in all these branches. In the same manner, many temples, Vedic pathshalas, educational and medical libraries as well as libraries that house and decode the ancient texts and other written records from the Peetham, are available for the general public and society at large. In addition, guest houses, functional halls, temporary transits,and various other facilities are also provided to serve the common man, who comes seeking knowledge from the Peetham. Besides such centers of learning and temples, there are a number of hospitals under the name of SharadaDhanvantari Charitable Hospitals, being run by the Matha, which have both Ayurveda and Homeopathy wings. In an effort to encourage students to gain enhanced knowledge, scholarships are provided to deserving scholars of Shastras and Sanskrit. Free food and books are also provided to the students by the Matha. The Peetham has also extended its reach across the seas, with its branches and centers for learning as well as temples constructed in many different countries, propagating the teachings of the master guru Sri Adi Shankaracharya to enlighten the Western world.

Devotees of the Jagadguru Shankaracharya Sri Bharati Teertha Mahaswamiji offered their salutations at the lotus feet of the Jagadguru on the occasion of his 60th birthday – shastyabdhapoorti – conducted over a span of 13 days, from April 4th through April 16th, at Sringeri in India. The actual birthday was celebrated on April 9th.

A township called Sri Bharati Teertha Nagar was created by reclaiming several acres of land along the Tunga River, adjacent to the hermitage of the Jagadguru. Over 1,500 Vedic scholars and other support staff were housed on site with all facilities like kitchens, dining rooms, bathrooms, toilets, medical vans, resident doctors etc. Several mandapas (halls), ranging from 5,000 sq. ft. to 60,000 sq. ft., were erected for this purpose.

The celebration started with a laksha modaka homa (oblations with 100,000 modakas) on April 4th with the participation of one hundred Vedic scholars in a 10, 000 sq. ft. mandapa. His Holiness did the sankalpa (resolve) with prayers for the welfare of the world, and for the successful conduct of theentire 13-day festivities to Lord Mahaganapati.

On April 5th, the atirudra anushthana commenced in the same mandapa as the laksha modaka homa, with the participation of one hundred and fifty vedic scholars. They recited the Srirudra mantra 14,641 times in a span of 11 days, followed by homa in ten fire pits, on April 16th. This is the highest form of ritualistic offering in the glory of Lord Rudra, for the welfare of humankind.

On April 6th, the historic Ayuta Chandi Mahayajna commenced, with the participation of 1,200 Vedic scholars. One thousand of these scholars recited the Chandi or Durga saptasati (also known as devi mahatmyam) 10,000 times in a span of 5 days, followed by homa on the sixth day (April 10th), in 100 fire pits. This is the first time in known history, that such an elaborate ritual was conducted anywhere. The sankalpa (resolve) taken by the Acharya elaborately listed prayers for the removal of all kinds of afflictions, and for health, prosperity and peace for all. The recitation of Chandi once is believed to give enormous benefits; one can only imagine the power of an authentic Ayuta Chandi Mahayajna of such a magnitude! The event was organized in a 60,000 sq. ft. tent. The oblations were made with sweet rice using three tons of rice and a similar amount of jaggery and ghee!

In parallel, special homas were performed with the recitation of Veda mantras from Rig, Yajur and Sama Vedas, in three separate mandapas.

His Holiness directly oversaw all the preparations, which were so efficiently orchestrated and managed by Padmashri Dr. V. R. Gowrishankar, CEO and Administrator of Sringeri Matha and its properties.

The events were witnessed by over 10 lakhs of devotees, for whom annadanam (free meal) was provided on all the days. The devotion and enthusiasm of the entire town of Sringeri and the neighboring villages was amazing. Farmers and the business community offered truck loads of vegetables, fruits, and other grocery items for the entire event.

Cultural programs were arranged with eminent artists on all evenings. Devotees from across the globe participated in all the festivities. Several TV channels broadcast the event live. A DVD on the life and teachings of Mahaswamiji was released. Tathaastu Imprints dedicated an all-color book titled “Avataram” on the day of Vardhanti, which depicts the life of Mahaswamiji.

On the evening of the Vardhanti, a grand public function was arranged; rich tributes were offered to His Holiness by several speakers; followed by the blessings speech of Jagadguru Shankaracharya Sri Bharati Teertha Mahaswamiji in eloquent Kannada language. In his speech, Mahaswamiji said that the Vedas emphasize two topics – the first, talking about Karma (action) and the second, about Jnana (knowledge). But the scriptures say that Jnana alone leads to liberation, and asks one to abandon all Karma. Even though it may appear contradictory, in fact, there is no contradiction, since there is no choice between the two. Karma leads to inner purity (citta suddhi) and enables one to pursue the path of knowledge, which ultimately leads to liberation. Once knowledge is attained, there is no need for Karma any more.

Mahaswamiji complimented Dr. Gowrishankar for his efforts in organizing the grand events, and blessed everyone with peace and prosperity. He also mentioned that, when devotees proposed to conduct a grand 60th-birthday function, he agreed, provided the functions were only performed in prayer to the divine. As such, the year-long celebrations, throughout the world, were all in prayers for the common good, and for the world at large.

There is a reservoir of compassion, seated amidst the forests in remote Sringeri, performing tapas (austerities) for the welfare of the entire human kind and the world, and showering grace on all. As far as the devotees are concerned, they don’t see a difference between GoddessSharada and His Holiness. He is Sharada in human frame! And everyone who witnessed this grand celebration, left the place with absolute peace and happiness, with hearts choked with emotions at the compassion of a great Jnani, the Jagadguru. 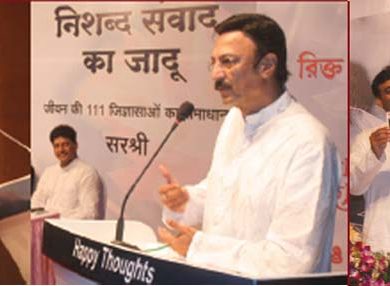