Distinguished international musicians celebrated the music of Maestro Sri Chinmoy at Songs of the Soul on August 28th with two concerts at the Skirball Center for the Performing Arts, New York University (NYU).

Rezwana Choudhury Bannya, renowned Tagore singer, and Madan Shankar Mishra, accomplished Indian sitarist, performed at the concert. Musicians from around the world played a variety of exotic and traditional instruments during the evening. The Sri Chinmoy Bhajan Singers, a vocal and instrumental ensemble of women, delighted listeners with their harmonious melodies. In a special appearance, Bannya delighted the audience by performing the melodies of Sri Chinmoy; Mishra performed creative improvisations based on Sri Chinmoy’s compositions. The grande finale of Songs of the Soul featured The Gandharva Loka Orchestra, led by one of Europe’s most innovative musicians, Panchajanya Burri.

The unique blending of musical genres including classical, jazz and contemporary fusion has captivated audiences across America, Canada, Europe and Asia. Sri Chinmoy believed that music is a universal language that can carry the listener beyond barriers of race, language and culture. “It is through music,” he wrote, “that the universal feeling of oneness can be achieved in the twinkling of an eye.”

During his lifetime Sri Chinmoy performed more than 750 concerts free of charge at many prestigious venues. In a creative odyssey that included music, art, literature and sports, Sri Chinmoy composed a monumental total of 21,000 songs—13,000 of which were written in his native Bengali. He moved to the United States in 1964 from his native India and called New York home until his passing in 2007. 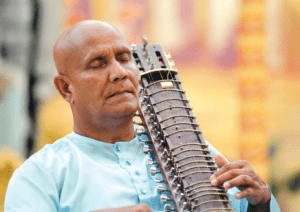 Left: Sri Chinmoy in Meditation while playing Esraj at one of his more than 750 Free Concerts. 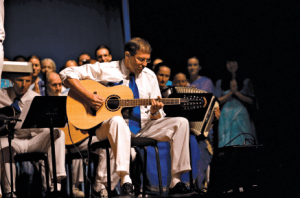 Right: Guitarist and leader of Gandharva Loka Orchestra Panchajanya Burri played along with the Orchestra at the concert. 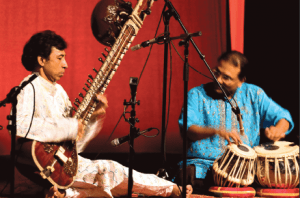 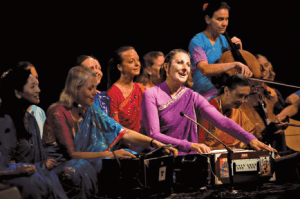 Right: Dr. Madan Shankar Mishra (left), considered one of the finest sitarists of India, performed creative improvisations based on Sri Chinmoy’s compositions. Dr. Mishra is pictured with tabla player Tapan Modak (right).
Right: Guitarist and leader of Gandharva Loka Orchestra Panchajanya Burri played along with the Orchestra at the concert. 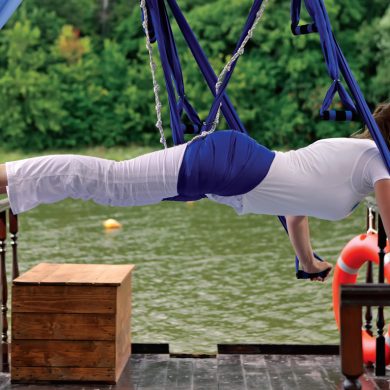 Is That Really Yoga?
X