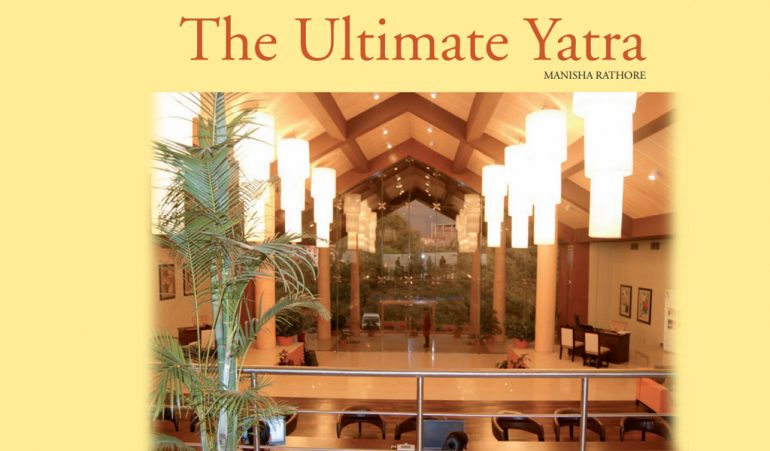 This is a hymn to the mighty Goddess, the all-powerful Mother who resides at the shrine of Mata Vaishnodevi, a holy cave located in the folds of the threepeaked mountain named Trikuta (pronounced as Trikoot). A pilgrimage to this shrine is considered to be one of the holiest pilgrimages in today’s times.

The Goddess is popular the world over as Moonh Maangi Muradein Poori Karne Wali Mata, which means: the Mother who fulfils whatever her children wish for. The number of yatris (pilgrims) visiting the shrine annually exceeds five million. The cave of the Mother is situated at an altitude of 5200 ft. Pilgrims have to undertake a trek of nearly 8 miles from the base camp at Katra in Jammu, India. It is the unflinching faith of the devotees, and the divine and charged aura of the hills that keeps people going on this trek, until at the end they are rewarded with darshan of the Mother Goddess inside the sanctum sanctorum – the holy cave. The Goddess is in the form of three natural rock formations called the Pindies. There are no statues or idols inside the cave. The journey inside the cave is similar to that of a child in the mother’s womb through the pre-natal waters, and finally one comes out on the other side feeling reborn – one’s sins get washed away and all negativity is shed. The holy shrine is charged with the power of millions of years of faith, and has the power of cleansing the auras of those who visit the shrine.

It is said that you do not plan a trip to this holy shrine, you will go when you are called…and there are millions who will corroborate this statement. My personal experience is a testimony to this. People from all walks of life walk the path, sometimes wondering if they will be able to do it. People who have health problems walk the whole stretch and later wonder how they did it. An ardent devotee Vasundhara Tawde says, “My doctor had told me that I should take it easy while doing the climb due to health problems. I was quite worried while climbing the hill but somehow I managed it, and after the trip I felt so happy and fulfilled – I do not know where all my problems vanished.”

The traditional concept of a pilgrimage is always a journey taken with utter hardship where all physical resources are stretched till the maximum. In India, where the last wish of 90 percent of senior citizens is a pilgrimage, it becomes a big challenge to fulfil this wish at Vaishnodevi due to the terrain, location and till sometime back, a lack of infrastructure and facilities.

It is said that you do not plan a trip to this holy shrine, you will go when you are called…and there are millions who will corroborate this statement.

The White Hotel at Vaishnodevi is a wish come true for many devotees for whom the challenge of the strenuous journey is the most major obstacle to overcome. The White Hotel is a 200-room hotel located at the base of the Vaishnovdevi shrine in Jammu. The rooms overlook exquisite vistas with the valley on one side and mountains on the other.

Swaran Salaria, the man behind the world’s first five star hotel in Jammu says, “For me this is a labor of love. It is more than a business proposition; it is a token of my gratitude to the Goddess for everything in my life. Secondly, this initiative makes a difference to the pilgrimage experience of my fellow pilgrims and this in itself is my reward.”

The hotel has deluxe rooms and executive suites and offers all the facilities of a five star hotel: a swimming pool, vegetarian multicuisine restaurants, a doctor on call, health club, coffee shop, a travel desk, and the Sansha spa. Guests are offered a traditional welcome. The hotel offers complete packages for pilgrims that include accommodation at the White Hotel Vaishno Devi, complimentary breakfast and one meal of the day, return helicopter tickets to the shrine with VIP Darshan facility, complimentary pick-up and drop from the airport/train station, complimentary transfers to the heliport, and complimentary usage of the gym and swimming pool. The rates begin from $100 per night.

Aman, one of the guests who stayed at the White Hotel says, “This is a very comfortable and luxurious hotel with affordable rates for all future Mata ka bulawa (call of the Mother), I will definitely stay here…”

Since the year 1986, when the Shri Mata Vaishno Devi Shrine Board was formed (under The Jammu & Kashmir Shri Mata Vaishno Devi Shrine Act, 1986), the management of the Shrine and regulation of the Yatra has been vested in the Board. The Board has undertaken a number of developmental activities aimed at making the Yatra a comfortable and satisfying experience for the Yatris. The Board continues to reinvest the offerings and donations received in carrying out improvements in various kinds of Yatri facilities.

The White Hotel at Vaishnodevi is a wish come true for many devotees for whom the challenge of the strenuous journey is the most major obstacle to overcome.

This is once-in-a-lifetime pilgrimage. It is believed that once we think of the pilgrimage, it’s like sending a request. Once the request is accepted, we get the much-awaited call and then the hills vibrating with power and energy beckon, and we come back recharged and renewed with a new lease on life.

Like with most old shrines, it is not possible to ascertain when exactly the tradition of pilgrimage to Vaishnodevi started. A geological study of the holy cave has indicated its age to be nearly a million years. Vedic literature makes no reference to the worship of any female deity, although the mountain Trikuta does find its mention in Rig Veda, the oldest of the four Vedas. The practice of worshipping Shakti largely started in the Puranic period.

The first mention of the Mother Goddess is in the epic Mahabharata. When the armies of Pandavas and Kauravas were arrayed in the battlefield of Kurukshetra, Arjun, the chief warrior of Pandavas upon the advice of Shri Krishna, meditated upon the Mother Goddess and sought her blessings for victory. This is when Arjun addresses the Mother Goddess as “Jambookatak Chityaishu Nityam Sannihitalaye,” which means “you who always dwell in the temple on the slope of the mountain in Jamboo” (probably referring to the present day Jammu).

It is also generally believed that the Pandavas were the first to build the temples at Kol Kandoli and Bhawan in reverence and gratitude for the Mother Goddess. On a mountain, just adjacent to the Trikuta Mountain and overlooking the holy cave are five stone structures, which are believed to be the rock symbols of the five Pandavas.

Perhaps the oldest reference to the visit of a historical figure to the holy cave is that of Guru Gobind Singh who is said to have gone there via Purmandal. The old foot track to the holy cave passed through this well-known pilgrimage center. Some traditions believe this shrine to be the holiest of all Shaktipeeths (a place where the Mother Goddess, the Eternal Energy, has Her abode). 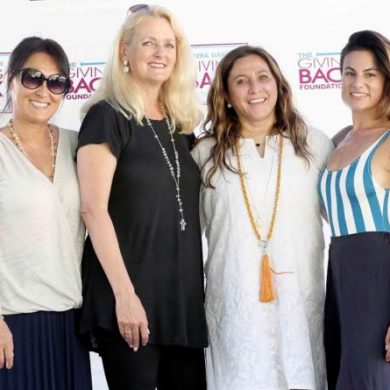