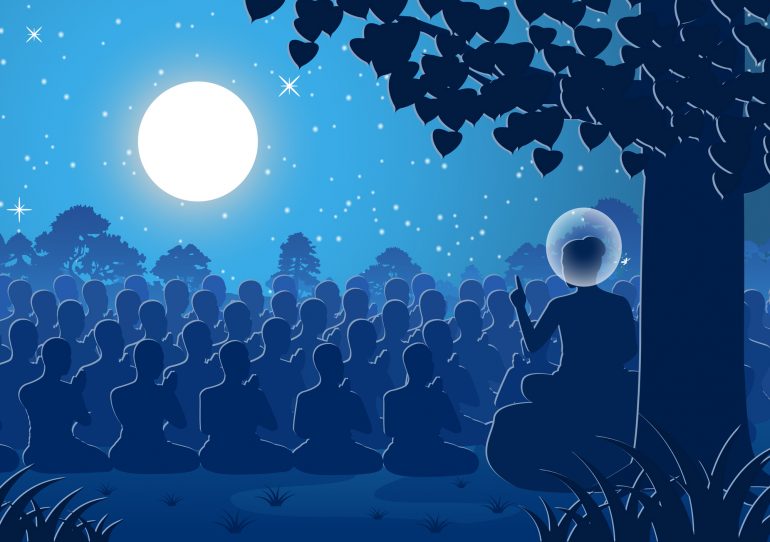 The Guru: He Who Awakens

“The Guru, who is higher than the highest, who always bestows bliss, and who is seated in the center of the space of the heart, (shining) like a pure crystal, should be meditated upon.”

The syllable “Gu” is darkness and the syllable “Ru” is light. The Guru is he who removes the darkness of ignorance with the light of self-knowledge. The Guru is he who awakens the disciple to the ultimate reality of the eternal, immortal nature of the Self. There is a saying that when the student is ready, the teacher appears. In the spiritual life, when one has a burning desire for self-realization, one meets a saint or sage.

Qualities of a Saint:

A saint or sage is a God-realized soul. He is one who has realized the Self as the imperishable, all-pervading essence of life. He knows the Self, not just intellectually, but through direct experience. His awareness is permanently established in the brilliant light of God-consciousness and as a result he is able to kindle the light of divine intelligence in others. Swami Papa Ramdas describes the characteristics of a saint:

“Sama Darshan or equal vision is a dominant trait that marks a saint from others. It is the keynote of his life. He sees God in all and loves all alike.  While ordinary people are obsessed by an individualistic outlook, a sense of separation from others, saints and sages who have realized the truth show a universal outlook in their thoughts, words and deeds. They are always conscious of their immortal and all-blissful nature and so are free from the fear of death. They know that life is eternal and that everyone is essentially divine.” The Value of a Guru:

The value of a Guru is that he is the living embodiment of the truth we are seeking, and as such, he is able to silently nourish the souls of all those with whom he comes into contact. He strengthens the aspiration of the seeker, purifies the mind and leads one gently upwards towards the light of truth. Anandamayi Ma says:

“Saints may be compared to trees, they always point upwards and grant shade and shelter to all… whoever seeks refuge in them wholeheartedly, will find peace and fulfilment.”

How will we know when we meet our Guru? We will simply know. Everyone will know in his or her own way; a source of peace and fulfilment will arise spontaneously. For example, when I first met my Guru, Maharishi Mahesh Yogi, and he looked at me, I felt that it was the first time in my life anyone had ever seen me. Of course, people had perceived the outer me, but I felt that no one had ever seen who I really was. I felt that when Maharishi looked at me, I was totally transparent. He knew all there was to know about me in a totally non-judgmental way. I was deeply grateful that someone had finally seen beyond the physical body into my innermost being.

The Guru helps the aspirant in both seen and unseen ways. In the presence of the Guru, if one is open and receptive, one can get a glimpse of the unbounded fullness of bliss, peace and fulfilment which characterizes the state of enlightenment. Once one has established an inner link with the Guru, it is not necessary to always be in his physical presence to receive his guidance and his grace. Swami Papa Ramdas explains:

“A God-realized soul alone can awaken and kindle another soul. Going to temples alone will not do. Reading books alone will not do. The contact of great souls who have realized God is essential… Satsang or association with a saint is indeed valuable. But it must be of the right kind. Internal contact must be established… Saints transmit their powers to others by thought, sight and touch. When a saint thinks of a person, even though he be far away, he is helped spiritually. A saint looks at a person – the person is transformed. A new consciousness dawns in him. If a saint touches an aspirant, the latter will feel a tremendous change taking place in him.” 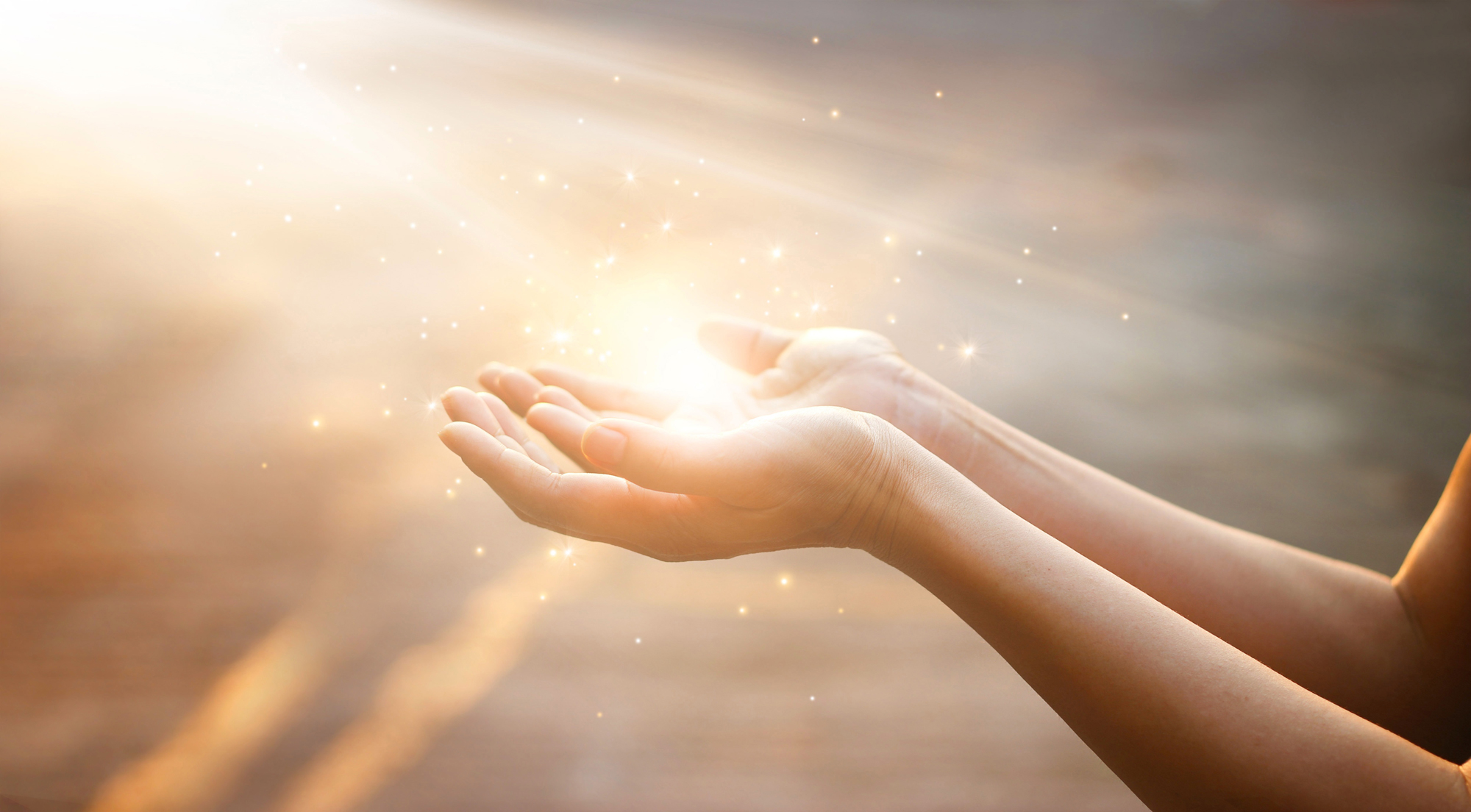 Who is the Guru:

Who then is the Guru? Does he exist inside or outside or both within and without? First and foremost, the God-realized soul is in constant communion with God. The Guru is not the form, not the body, not the caste, not the religion, not even the belief system. The Guru is the embodiment of pure unconditional love. The Guru is God in human form, in that he is the full embodiment of the divine essence of life. Ramana Maharshi, who attained enlightenment without a Guru explains:

“God takes the form of a Guru and appears to the devotee, teaches him the truth, and moreover, purifies his mind by association. The devotee’s mind gains strength and is then able to turn inward. By meditation it is further purified and it remains still without the least ripple. That calm Expanse is the Self. The Guru is both “external” and “internal”. From the “exterior” He gives a push to the mind to turn inward; from the “interior” He pulls the mind towards the Self and helps in Quieting of the mind. That is Guru-kripa. There is no difference between God, Guru and the Self.”

The Right Approach to the Guru:

In order to benefit from the teachings of the Guru, it is necessary for the aspirant to approach the Guru in the right way, with humility, reverence, faith and devotion. In chapter 4, verse 11 of the Bhagavad Gita, Lord Krishna says:

“As men approach Me, so do I favour them.”

In the Gita, we see that Krishna’s teaching to Arjuna actually commences from chapter2, verse 7, after Arjuna has completely surrendered himself at the feet of the Lord:

“I am Thy disciple; teach me for I have taken refuge in Thee”.

In his commentary on this verse, Maharishi Mahesh Yogi says:

“Arjuna becomes silent because he is unable to go any further on his own – he stops, his intellect rebounds and he falls at the feet of the Lord…

This is a great secret of success when guidance is sought from another in any walk of life… it can be imparted only to those who are at least willing to receive it. Their willingness is judged by their readiness to receive, and this in turn by their one-pointed attention in faithful devotion to the master.Faith makes the student a good assimilator of knowledge. Devotion sets him free from resistance and at the same time influences the heart of the master, whence the spring of wisdom pours forth. Devotion on the part of the disciple creates affection in the heart of the master… Such is the glory of devotion and faith in a disciple. He surrenders at the feet of the master and cuts short the long path of evolution.”

ParamhansaYogananda explains the relationship between Krishna and Arjuna in this way:

“Within the devotee, Lord Krishna is thus the guiding Divine Intelligence speaking to the lower self that has gone astray in the entanglements of sensory consciousness. This Higher Intelligence is the master and teacher, and the lower mental intellect is the disciple, the Higher Intelligence advises the lower vitiated self on how to uplift itself in accord with the eternal verities, and in fulfilment of its God-given duty.”

God, the Guru and the Self are ONE:

When a seeker of enlightenment meets a saint, it is a turning point in their life. Why? It is because the path to enlightenment is always bumpy. There are many hurdles, tests and trials one must endure in order to emerge triumphant from the dark tunnel of ignorance into the full sunlight of self-realization. Moreover, it is a pathless path because, in truth, there is nowhere to go. The Self, which is the reflection of God, is omnipresent and yet hidden within the heart of every living being. It is nearer than the nearest, yet subtler than the subtlest. It is immanent and transcendent. It is invisible, yet it has manifested as the entire universe. It is smaller than the smallest and greater than the greatest. Its magnitude extends from point to infinity. In the Brihadaranyaka Upanishad, the Self is described as:

One may ask” If the Self or God is omnipresent and seated in our own hearts, why do we need a Guru? Sri Ramakrishna Paramahansa answers:

“He who can himself approach God with sincerity, earnest prayer and deep longing needs no Guru. But such deep yearning of the soul is very rare; hence the necessity of a Guru… If you are in right earnest to learn the mysteries of God, He will send you the Sadguru, the right teacher. You need not trouble yourself about finding out a Guru.”

Ultimately, God, the Guru and the Self are one. Devotion to the Guru is devotion to God and devotion to God is devotion to the Self. God in the form of the Guru enlivens divine intelligence in the disciple, and by deep meditation on the Self, the dark clouds of ignorance are dispersed and the disciple attains self-realization. In the state of enlightenment, the disciple is a perfect instrument of the Divine Will, performing action motivated by a desire for the happiness of all living beings and living the fullness of life in a world illuminated by the light of God.

Barbara Ann Briggs is a certified teacher of Transcendental Meditation and the author of two books: The Contribution of Maharishi’s Vedic Science to Complete Fulfilment in Life and Pilgrimage on the Path of Love, a novel of visionary fiction. www.barbaraannbriggs.com 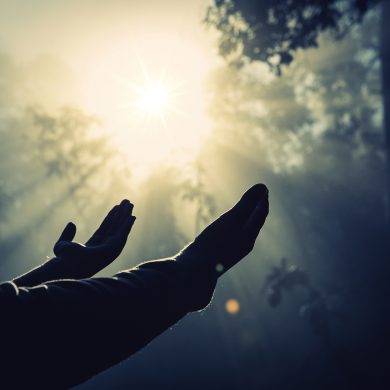 I am Here
X