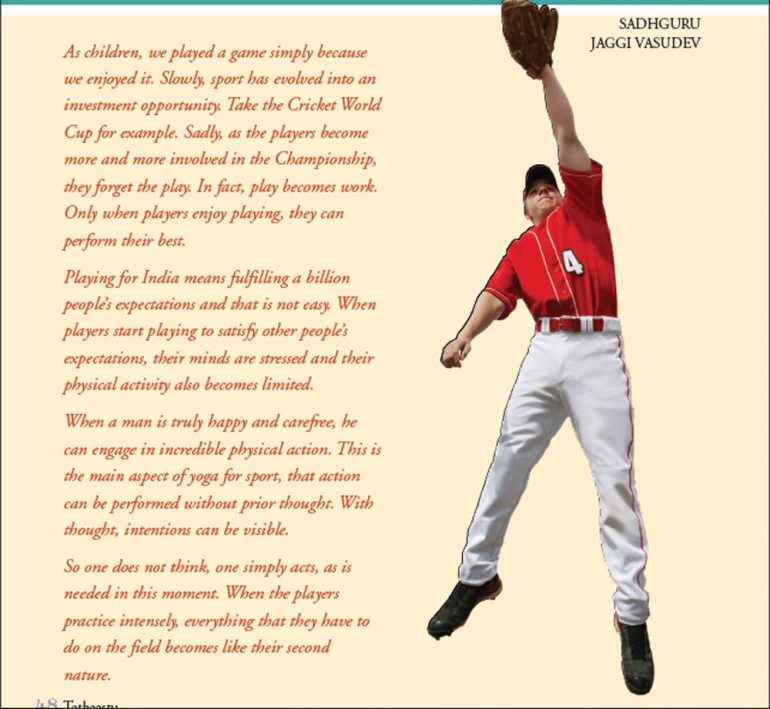 As children, we played a game simply because we enjoyed it. Slowly, sport has evolved into an investment opportunity. Take the Cricket World Cup for example. Sadly, as the players become more and more involved in the Championship, they forget the play. In fact, play becomes work. Only when players enjoy playing, they can perform their best.

When a man is truly happy and carefree, he can engage in incredible physical action. This is the main aspect of yoga for sport, that action can be performed without prior thought. With thought, intentions can be visible.

So one does not think, one simply acts, as is needed in this moment. When the players practice intensely,everything that they have to do on the field becomes like their second nature.

Accepting the other team is most important.When acceptance is total, there is no more opposition.

Action can simply flow out of them – as the game demands. This way, they can respond with agility to whatever the other team throws at them. With proper practice of yoga, bringing sufficient control over their mind and body, they can learn to act without prior thinking.

Meditation means going back to one’s original nature. When one is simply with this breath, all identifications dissolve. It is impossible to meditate as a champion. Similarly, when playing a game, the sportsperson should drop all identity.

If the sportsperson constantly thinks of himself as per his identity, it would be very burdensome. Once he becomes 100 percent free of identity, he doesn’t have to play the game. It just happens.

How is a sports legend born? Surely not because the team he played against was not competent. For such a player, coordination is at its peak. He knows what he wants in his life. He is so committed to what he wants, that it becomes a reality. If our sports people can organize their energies, bodies and minds in such a way that they get more and more focused, everything will happen for the best.

Cricket is just one form of activity the player has chosen. It is important that this person becomes truly aware – physically, mentally, emotionally and spiritually. Then whatever game he plays, he will play very well. When fools are playing cricket, cricket will be a foolish game. When intelligent people play cricket, it will be an intelligent game. It all depends on who is playing the game.

What the players make of themselves is more important than the game. Without bringing a certain quality into themselves, they cannot bring quality into the game. If they cultivate humility, they can aspire to reach unimaginable heights of performance. Humility is just acceptance of what is. Out of this acceptance, they can use their intelligence and act.

Acceptance is important to connect to a situation and to respond to the situation intelligently. Accepting the other team is most important. When acceptance is total, there is no more opposition.

Only if the other team is there can a game be played – only then is a match possible. With acceptance, there is no tension. The other team’s capabilities and victory record will no longer be a problem. With total acceptance, their presence will diminish. This is a spiritual process also. When acceptance is total, the entire existence becomes a part of oneself. This is the way of nature. 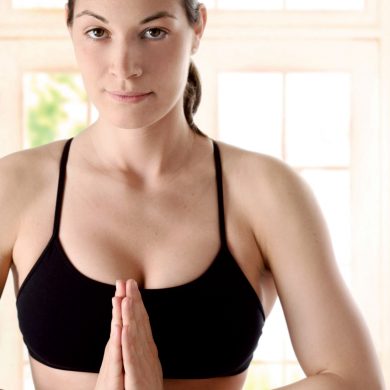 Mastering the Mind with Yoga
X