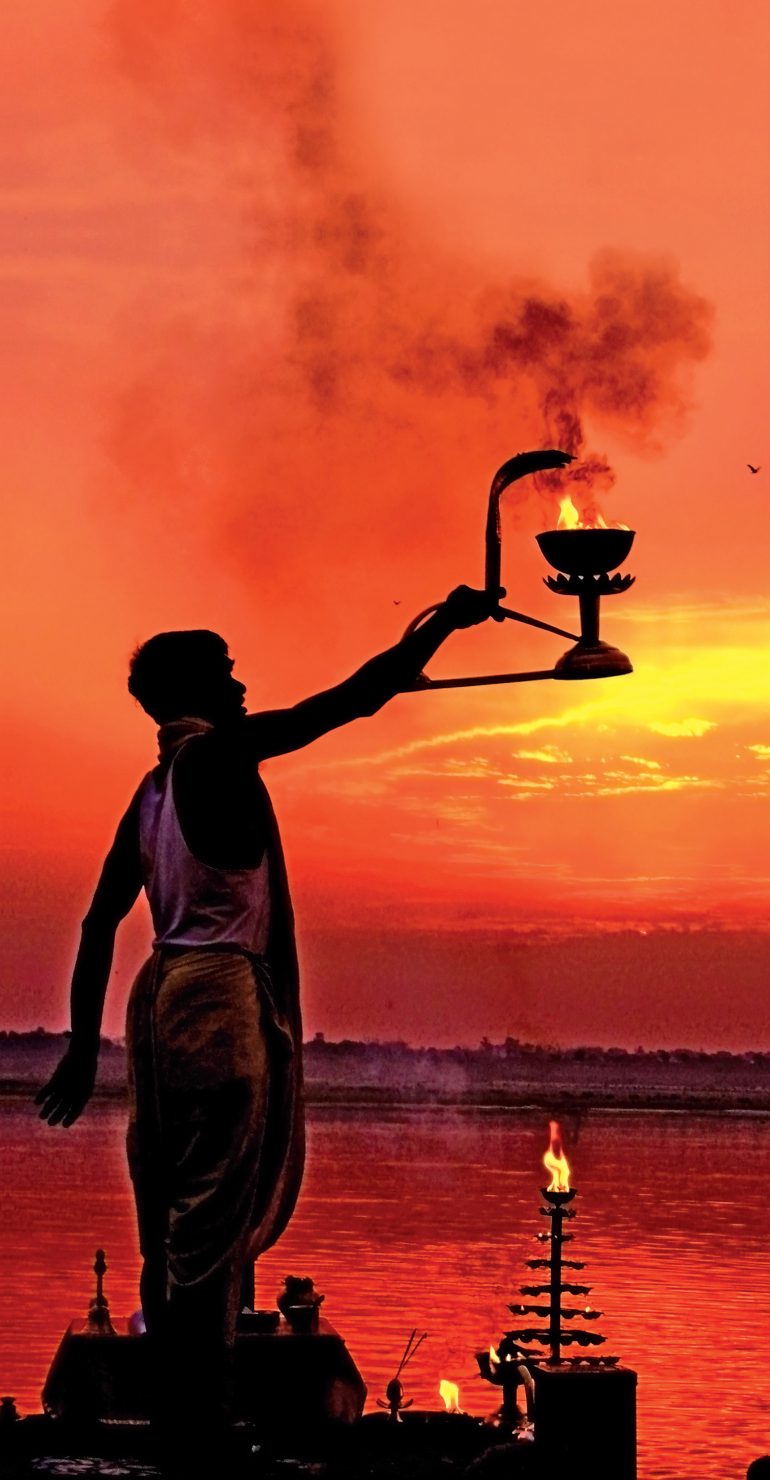 A sadhu sits, his lean body draped in a single, worn scrap of orange-ish brown cloth, swaying ever so gently in the rapture of his meditation. His head tilts barely perceptibly to the right. Otherwise his posture is perfect, his legs folded neatly and easily into lotus, palms up on his knees. His body gently sways to music only he can hear — music which brings a faint smile to his lips.

An elderly woman gently unfolds her cloth asana and lays it on the red tile a few feet from the sadhu. Raising her saree, she bends her knees and leans forward, placing both palms on the ground, then carefully squats before lowering herself to the ground.

A family splashes in the Ganga, at least 10 or 15 of them, ranging in age from quite young to at least 60. The men are in their underwear, bright blue on the young boys and faded white on the older men. The women and girls are fully clothed in modest salwar kameezes. They shriek and run, splash and swim in the shallow water near the ghat. “Jai Gange! Jai Gange! Jai Gange!” one of the men yells as he flails his overweight self through the air landing back in the water next to his brothers, sisters, cousins and children causing waves of water to engulf them all.

It is sunset on the banks of the Ganga, summertime in Rishikesh, and I have come for my evening walk – a time of solitude and quiet (if not externally, at least internally). I am walking on one of the numerous ghats – the marble and tile pier-like platforms built on the banks of the river – on which people pray, meditate, stroll or simply watch the river. As I walk to the North end of the ghat, the sounds of the Ganga aarti coming from our own ashram – 3 ghats northward – fill my ears. A crowd of several hundred gathers each evening to sing the praises of Mother Ganga as Pujya Swamiji leads in divine, ecstatic chanting. At the northernmost end of the ghat I turn and begin walking back southward.

A young, professional couple has come to the ghat for their evening walk. They are both in traditional Indian attire with bright white Nike running shoes on their feet. They walk side by side, quickly, at a pace that might be appropriate for the treadmill at a gym but seems markedly out of place on the serene river bank. No one seems to notice however.

A small group has gathered down on the last step, where the water flows just a foot below. A simple brass oil lamp in hand, they perform the same aarti ceremony which is going on – on a grand scale – at our ashram just 200 feet away. “Om Jai Gange Maiya” they sing, acapella and completely out of tune, each clapping to a different rhythm, but without even a trace of self consciousness. After all, they are singing for God.

I pass the sadhu again, his eyes still gently shut, the faint yet ever-sopresent smile still on his lips, transported in to a far-off realm, ecstatically oblivious to the rowdy family splashing and shrieking gleefully in the Ganga a mere ten feet away.

The elderly woman has lit a stick of incense, the bottom end of which she puts into an apple to hold it up, and she has pulled a long rudraksh mala out of her purse. She takes the pallu (tail end) of her saree gracefully sweeping it up from behind her back to cover her head before she begins her prayers.

Two teenage girls come prancing down the ghat in their tight jeans and t-shirts, laughing as they take up their own place near the water, on the edge of the ghat. One of them pulls out her mobile phone and they begin to take pictures of each other, in various poses copied from the covers of fashion magazines, with the sun setting into the Ganga as the backdrop.

The elderly woman signals to me by waving her hand once as I approach. It is an order, not a request. Had I not lived in India for twelve years I might be taken aback by the presumptuousness of the beckoning. But I stop at her asana and bend down. She does not want to chat. She does not want to know “your country, ma’am.” She does not want one snap. She simply and sweetly motions for me to give her some water from the river. Although the ghat is a mere foot above the flowing water, she is unable to reach down to it. I step into the wet sand and bend down, cupping water in my hand. Prior to beginning her japa, she wants the mala to be blessed and purified by the Ganga yet she’s unable to dip it herself. As I pour the water from my hand into hers I am consciously aware of the fact that I am a foreigner. Indians somehow have an innate ability to hold holy water in their cupped palm for an indefinite period of time without spilling a drop, while the precious water slips freely through my fingers despite my best attempts at preserving it. She does not seem to notice this shortcoming and her eyes fill with tears of gratitude as I pour the water into her cupped palms. Not realizing that I speak Hindi, she says, “Thank you” in English.

The small group performing aarti sings louder and louder, their bodies now each swaying to an individual tune, the smoke rising high in the air, but the sounds of their aarti quickly dissipate as I near the north side of the ghat and the melodious, beyond professional sound of Pujya Swamiji singing fills the air – coming from nearly 200 feet away.

The family is still shrieking and splashing in the Ganga, children diving into the water off the rocks…

A mangy white dog chases a mangy black one, trying desperately to mount. The black female yelps as she runs across the ghat, her wet tail spraying water everywhere. Nearly knocking over the sadhu and the elderly woman (neither notices however), the dogs tear through the small crowd singing aarti. Devotees gently step aside to let the dogs pass; no one other than the children pays attention. 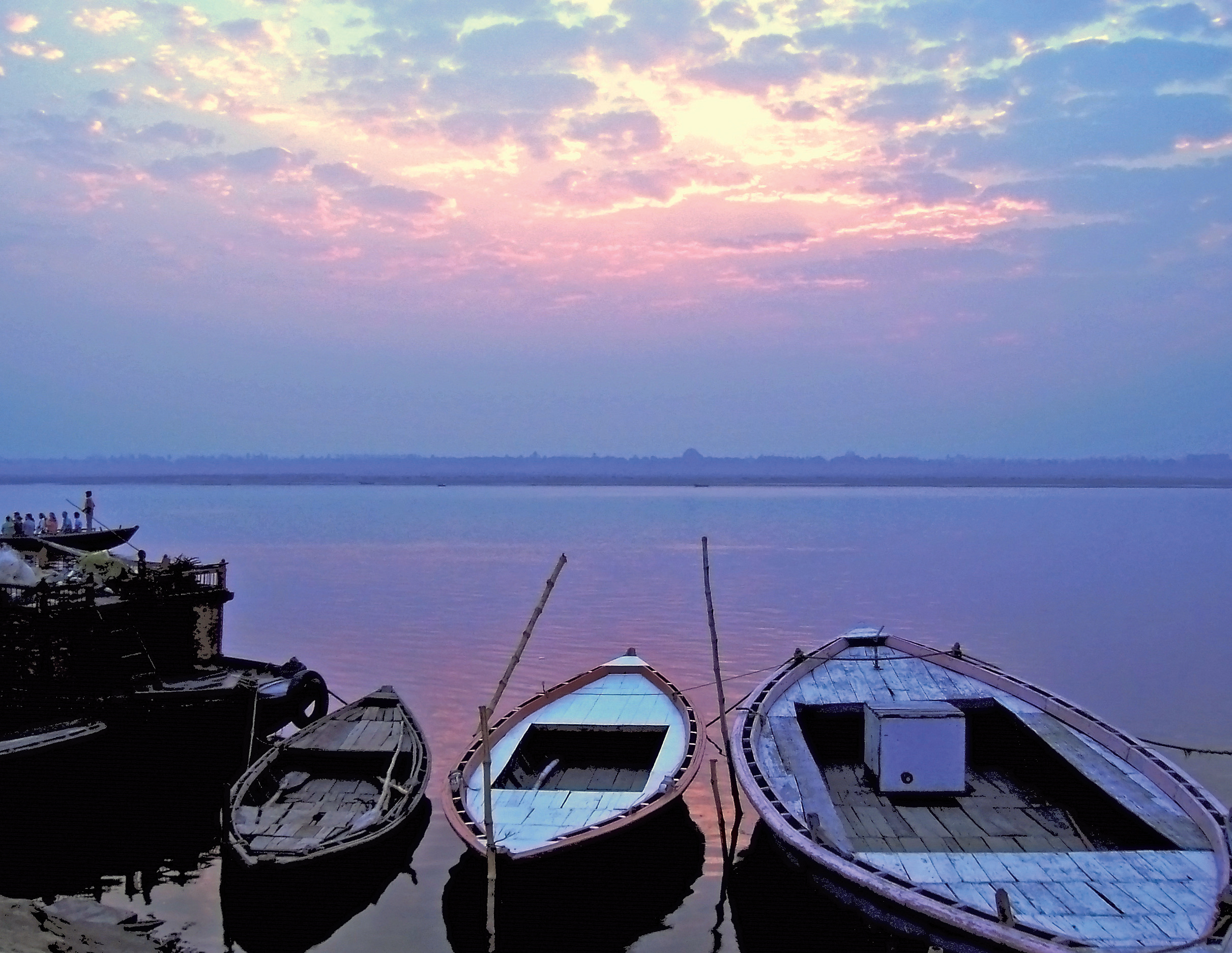 Across the river I notice a large fire burning, one of the numerous cremations that takes place each day. In the fading light of sunset I can barely make out a small crowd of mourners gathered around the burning body of their loved one. The fire is huge and its flames and smoke rise quickly into the air, mingling somewhere not so far off with the smoke and flames of the aarti being performed in groups large and small up and down the river banks. I try to imagine what it must be like, standing on the edge of a river watching your mother or father or spouse or child go up in flames against a backdrop of celebration. Personally, I do not think I could tolerate it. “How dare the world not come to a complete halt now that my loved one is no more? How dare the sun rise when my loved one is not here to greet it?”

Yet here in India, birth and death, joy and sorrow, rich and poor, somber and rambunctious, all seem to flow together as seamlessly as the waters of the Ganga carry both the ashes of the deceased and the flowers of the devotee.

Sadhvi Bhagwati Saraswati, a PhD in Psychology, was raised in America and graduated from Stanford University. She left the US to live permanently at Parmarth Niketan Ashram in India and took official vows of renunciation in June 2000, from her guru Pujya Swami Chidanand Saraswatiji. Bhagwati teaches meditation and her talks blend knowledge and logic of the West with the insight, spirituality and wisdom of the East. www.parmarth.org 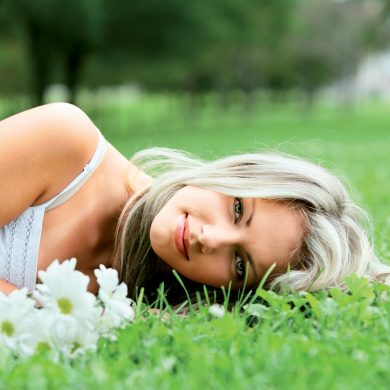